END_OF_DOCUMENT_TOKEN_TO_BE_REPLACED

Toray Plastics (America), announces that it will feature new, leading-edge, high-barrier flexible packaging materials that are made in America and creative packaging solutions at Pack Expo International 2014, McCormick Place, Chicago, in November. “Toray Plastics is the only United States manufacturer of precision-performance value-added polyester, polypropylene, bio-based, and metallized films,” says Milan Moscaritolo, Senior Director of Sales.”Sourcing advantages, performance, value, technical support, and sustainability all influence the end user’s and converter’s decision when choosing film. We look forward to meeting Pack Expo attendees and explaining how Toray Plastics brings those key elements together to help the customer grow his business.” Moscaritolo notes that among the technologies that will be of special interest to attendees are ultra-thin, ultra-high-barrier BOPP; heat-sealable metallized BOPP; an expanded line of advanced PET lidding films; sealant technologies; metallized PET; PVdC-free and solvent-free films, and bio-based films.
Some of the films to be highlighted are:
An expanded and enhanced line of LumiLid brand of dual-ovenable polyester lidding films, which meet FDA standards and may be used with oven temperatures of up to 400øF for 30 minutes.  LumiLid films incorporate specialty performance film and sealant layers, delivering specified performance and seal-strength characteristics. They are available in clear, white, or metallized options for refrigerated and frozen side dishes and entrees.
New Torayfan CBS2 film, an economical, environment-conscious, PVdC-free, clear, high-oxygen- and moisture-barrier BOPP film designed for use as the inside sealant web for the packaging of bakery items, crisp salty snacks, cookies, crackers, granola, fruit and nut mixes, and confections, as well as pet food and treats and non-food items. Heat-sealable CBS2 BOPP film is also the more economical choice when compared with aluminum oxide (AlOx)-coated films.
New Torayfan PC5 metallized BOPP film, an ultra-high oxygen- and moisture- barrier film usable in tri-laminations, as a foil replacement, and as an overwrap lamination or wrapper. PC5 film is a durable, cost-effective replacement for foil in a typical paper/PE/foil/PE packaging structure. In addition, it is ideally suited for use as the inner barrier web of a tri-lamination in gas-flushed stand-up or flat pouches and can also be used as a cold-seal layer and as part of a lamination for high-quality overwraps.
New Torayfan MWX6 metallized, bright white cavitated BOPP film, designed with a proprietary, “ultra-barrier” layer on one side for superior moisture-barrier and excellent oxygen-barrier functionality. The other side is an improved hermetic, heat-sealable layer. New MWX6 film can be used as a monoweb or a lamination.

END_OF_DOCUMENT_TOKEN_TO_BE_REPLACED

Ryobi MHI Graphic Technology Ltd. has released detailed information regarding press sales and support in the UK and Europe for the Japanese printing equipment.

END_OF_DOCUMENT_TOKEN_TO_BE_REPLACED 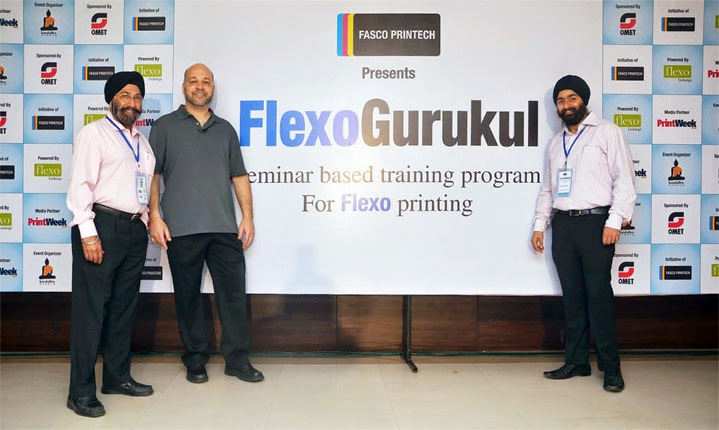 FlexoGurukul – an ongoing flexographic print training program launched by New Delhi based Fasco Printech Pvt. Ltd. will be having its Second edition on 27th and 28th October 2014 at Pragati Maidan in New Delhi. FlexoGurukul is a seminar-based technical training programme for printers in the flexo and narrow web industry or are looking to enter into the narrow web flexo printing industry.
The two day seminar will see the international flexo expert, Frank Burgos taking the centre stage and talking on controlling colour in the flexo pressroom. Frank Burgos is President of USA based FlexoExchange.com, a company based in USA and recognized for training services provided by them in the ﬁeld of ﬂexographic printing. “Colour is one of the most critical part of the printing process and Burgos would be covering the various challenges a company faces in the flexo press room for managing color and how to overcome them,” Pawadeep Sahni of Fasco Printech, said.
The previous edition of the Flexo Gurukul programme was held at Khar Gymkhana in Mumbai from 28 to 29 April, 2014 and covered the importance of inks in the flexo process. The seminar dwelled on the three main types of inks namely, solvent-based, water-based and UV-cured inks, their composition and functions. It also included various tools and methods for monitoring basic ink properties and problems related to ink and the importance of measuring as also controlling pH and viscosity of ink. The first edition also covered topics like photopolymer plates, both analogue and digital and problems related to plate defects, plate mounting tapes and anilox rollers and empahsied the need for their maintenance procedures.
Chief mentor Harveer Sahni says: “The programme is an attempt to train and strengthen the people in the flexo printing industry in India and South Asia. We would like the training and education part to grow up to become an institute. We have a vision and hope to accomplish it substantially some day for the benefit of the flexo printing industry. Flexo Gurukul, which starts from basic level, will gradually progress to the advanced stage of flexo printing.”

END_OF_DOCUMENT_TOKEN_TO_BE_REPLACED 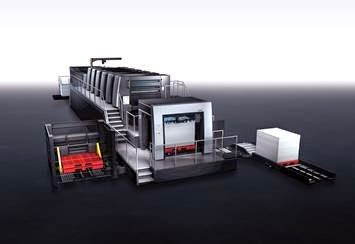 Heidelberg has increased the maximum running speed of its 57″ Speedmaster VLF XL 145 and 64″ Speedmaster VLF XL 162 presses by up to 20 percent. Targeting the folding carton market, this next level of efficiency is enabled by the new “Packaging Speed Performance” (PSP) packages. Heidelberg’s Speedmaster XL 145/162 PSP printing presses are now available with increased maximum speed and top productivity up to 18,000 sph for the Speedmaster XL 145 and 16,500 sph for the Speedmaster XL 162. These speeds lead the industry and confirm that the newest press platform available is also the fastest.
Perfect for High-Volume Producers
Heidelberg’s new PSP speed class presses are designed for converters requiring maximum throughput and minimal waste. Key applications include conventional long runs in VLF packaging, e.g., pizza and cereal boxes, frozen foods, confectionery, pet food, and electronics. Superior Overall Equipment Efficiency (OEE), a measure of makeready time, makeready waste, average net production speed and level of utilization, is critical to the success of this business model. By optimizing all of the components of OEE, the Heidelberg Speedmaster XL 145 PSP drives performance to new heights. Calculations confirm that a Heidelberg Speedmaster XL 145 VLF with PSP package, working three shifts per day, six days per week, produces twice as many sheets as a 2007 packaging press running at a maximum rated speed of 15,000 sph. The Speedmaster XL 145 with Packaging Speed Performance can produce 70 million or more sheets per year.
Many innovations enable the Speedmaster XL 145/162 to achieve top speeds consistently. These include an updated feeder, improved sheet guidance, and a 32-foot delivery optimized with Heidelberg’s patented high-performance dryers. Not only do the Speedmaster XL 145 PSP and XL 162 PSP feature the longest drying sections on the market, but also unique-to-Heidelberg, round air nozzle technology that ensures efficient drying for the coating. The dryers are also equipped with seven slide-in units to ensure smooth production and complete drying at maximum speed.
When print quality is a priority, the high-performance inking and dampening system of the Speedmaster XL 145/XL 162 sets standards in color consistency throughout the run, i.e., the form rollers are smoothly transitioned onto the plate (no bending required), rather than hitting the front bend of the plate, often leading to stripes. Especially at higher machine speeds, Heidelberg’s Prinect Inpress Control spectrophotometric inline measuring and control system provides a major assist for operators by adjusting color and register on the fly.
The Evidence Is In
One year ago, key innovations on Heidelberg’s Speedmaster XL 145/162 VLF press series platform were recognized with the 2013 InterTech™ Technology Award from Printing Industries of America-the first press ever in the 57″/64″ class to be so honored. Heidelberg became the U.S. market leader in VLF packaging presses for the first time in 2014, and has sold multiple Speedmaster VLF XL 145/162 models with the new PSP option to demanding customers in three U.S. locations to date this year.
Since the start of series production in 2009, more than 100 VLF Speedmaster XL 145/162 presses have been sold worldwide. Some 70 percent of these are used in package printing. Exacting customers in North America and abroad also have placed multiple repeat orders for Heidelberg’s VLF XL presses after seeing their initial investment exceed expectations in terms of availability, capacity, and print quality. Currently, Heidelberg is recording the highest volume of orders since the start of production.

END_OF_DOCUMENT_TOKEN_TO_BE_REPLACED

Again Q.I. Press Controls invests in expanding its offerings to the market. In April this year Q.I. Press Controls acquired the business and assets of EAE, the control and automation specialist for printing machines. Now Q.I. Press Controls proudly announces they have entered into a partnership with Perretta Graphics.
Perretta Graphics Corporation is an American organization and global leader in the development and sale of remote ink and register control, ink pre-set systems, register motorization and more. The complete product portfolio of Perretta Graphics will be added to the already extensive portfolio offered by Q.I. Press Controls’ world wide offices and agent network.
“With this partnership we can offer our customers an even more comprehensive solution,” states Menno Jansen, Chairman of Q.I. Press Controls. “Efficiency improvement will be one of the many advantages of offering such a broad portfolio. Not only because of the joint understanding and management of this greater part of the production process but also as customers can rely on one partner to coordinate that complete process.”
“The fundamentals of Perretta Graphics, innovation, quality and customer service are in line with ours. Given the know-how and abilities of all involved new innovations are bound to arise in the near future. This together with the availability of our strong standing global office and agent network to service and support the market, makes us confident. Confident in once again having set another step to realizing our goal of simplifying the steadily growing complexity of the printing process and being able to offer our customer a “one stop” total solution”, Menno Jansen concludes.